With the first timid blooms of spring, Bologna opens its doors to an enticing exhibition devoted to Ukiyo-e, the iconic Japanese art movement celebrating the ephemeral beauty of life. As a lover of Japanese art in general and of Ukiyo-e graceful aestethics in particular, I hurried to the opening of “Giappone: storie d’amore e guerra” (Japan. Tales of love and war) today at Via Saragozza’s Palazzo Albergati.

Considering how popular this particular movement is and how easy it would be to craft a crowd-pleasing ensemble that just picks up a little eroticism here and a couple of haiku there, I was prepared to be disappointed but, if you forget about the fake door at the entrance (vaguely reminiscent of a suburban Chinese restaurant), the exhibition is actually rich and fascinating, and its broad collection of works beautiful in the healing, soathing sense of the word beauty. 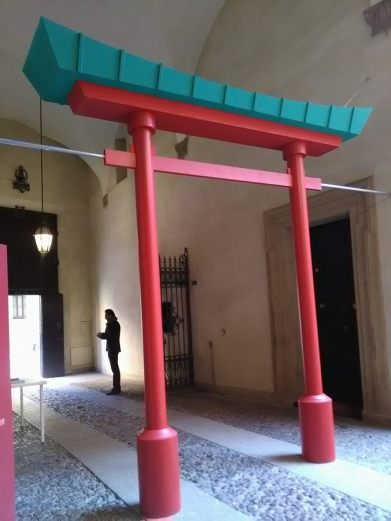 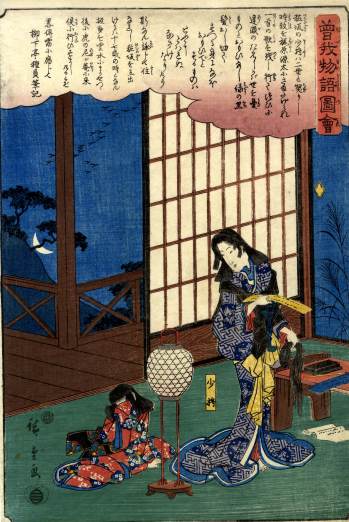 For those not familiar with it, Ukiyo-e (oftern translated as “The floating world”) is an artistic movement spreading from the early XVIIth up tho the late XIXth century, the so-called Edo Period, a large two-century period where Japan’s sensibility was mostly turned inwards, foreign influences were scarce and art took a decadent, hedonistic turn.

Courtesans, theatre actors, samurais, kimonos, flowers blooming, snow falling, sex being consumed in a joyful, elaborated fashion, gracious maidens combing lonk, dark, silky hair. Such were the subjects and this was the rich (literally and metaphorically) world depicted is the Ukyo-e’s exquisite works, most of them being engravings, technically woodblock prints, a method of printing in relief derived from Chinese art, bearing the signature of artists such as Hokusai, Hiroshige, Utamaro. The exhibition mostly focuses on the artists and history of the Eighteenth century. 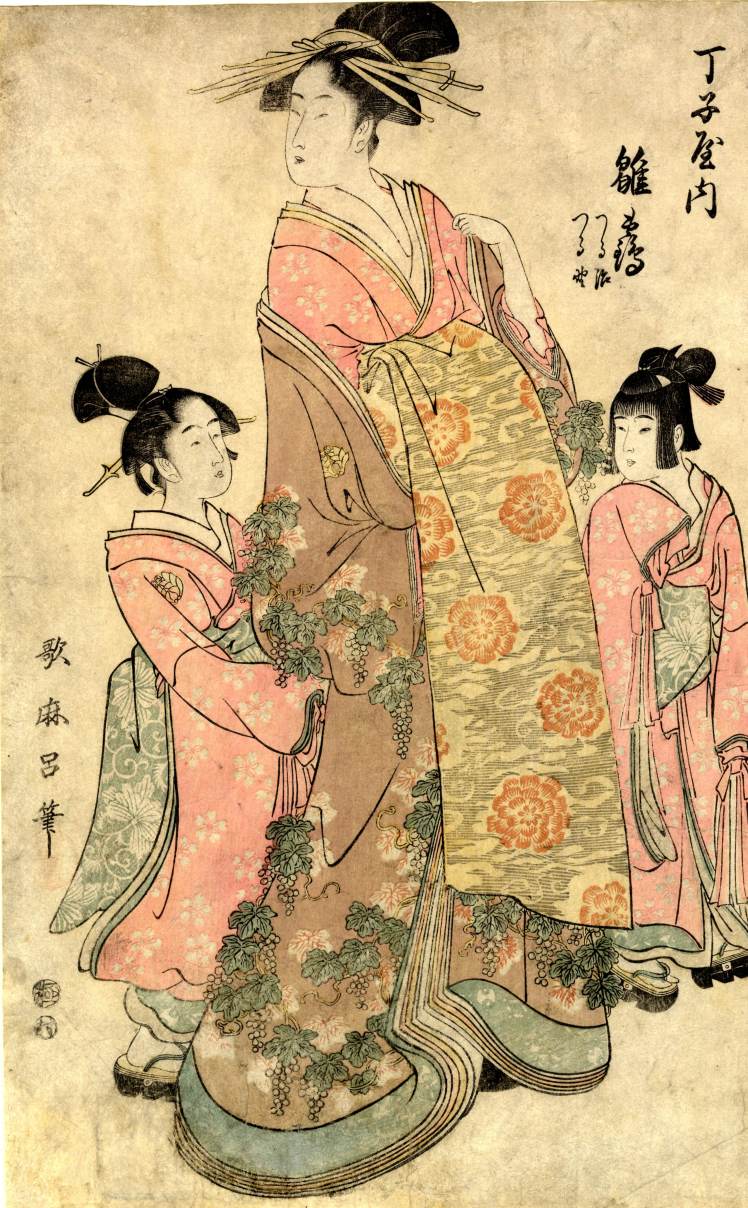 About signatures: there’s one interesting explanatory panel helping visitors “read” most of the works, especially the not so rare prints where images are enriched with words. Most of the prints have at least three or four writing items in the form of ideograms: the series’ names, the editor’s seal, the censor’s seal and, of course, the artist’s signature.

Shunga wasn’t all about sex though: according to the exhibition’s curator, it was more about being so aware of the transitory nature of everything that enjoying pleasures and celebrating hedonism was just a logical choice. Sexual intercourse, just a segment of the big picture, kind of became the biggest deal of Shunga only in the prudish eye of Westerners.

But such content is actually of striking beauty, mostly thanks to the works of Ikeda Terukada, a feast of interlaces bodies, revealing kimono patches and sudden colours (mostly a beautiful bright red) popping out of the love scene, testifying an eye for image construction and sophistication that is never second to the love for lust. 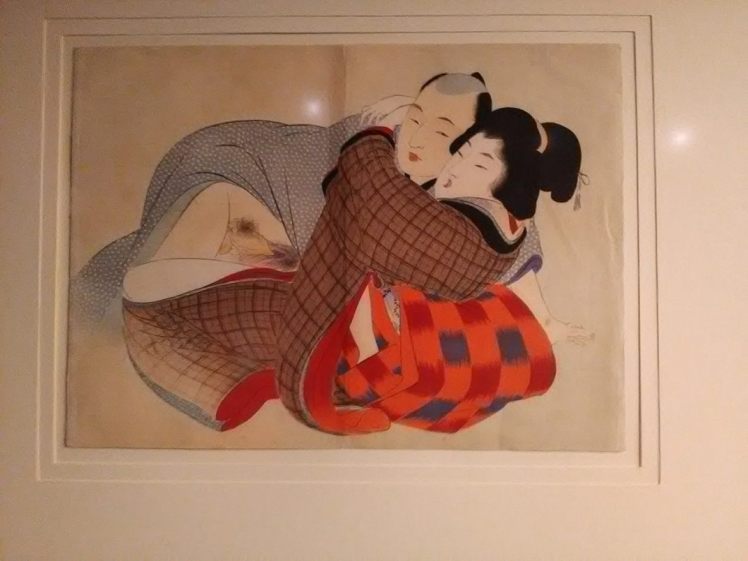 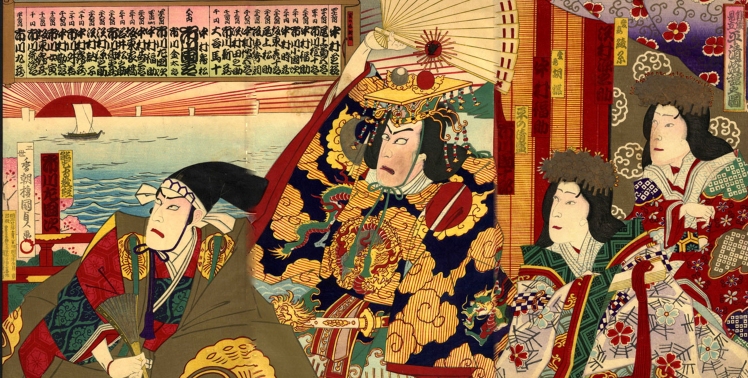 The exhibition covers the most important themes and icons of the richness that the Ukiyo-e’s world represented, building a portrait of what was life for the wealthy people back in the Edo Period: the intersections between the fascination for nature and shintoistic sensibility, the artistry of No and Kabuki theatre, as well as the actual fame of their main actors, sub-genres such as musha-e (depicting famous heroes and legendary warriors) and hi-no-maru (the circle of the sun, in relation to Emperor Takakura, later evolving into Japan’s iconic symbol: The Rising Sun), the decline of imperial power and the emergence of the Samurais. 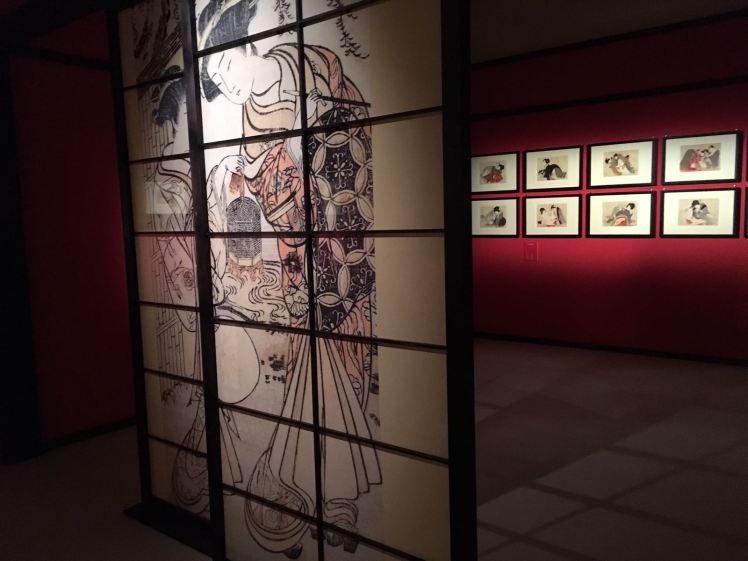 And of course there came the idealized female beauty, as expressed in the three variations of bijin (graceful yet majestic, luxurious yet fragile), geisha (an artist rather than a courtesan) and ōiran (the key figure in the life of the pleasure quarters, whose expertise covered painting and mastering tea ceremonies as well as other types of entertainment).

We will find further representations of the female beauty in the last section of the exhibition, covering Shin hanga and Sosaku hanga, the “new print” movements of the early decades of the XXth century, an attempt from most editors to replicate the fading Ukiyo-e’s fame while adding new twists reflecting a more contemporary sensibility.

And yet it must have been difficult to stand up to such a high standard and to create something as impressive as Ukiyo-e’s perfectly harmonious blend of grace, composure, sheer beauty, fantasy, poetry and apparent simplicity. Perhaps it was just my perception, but this less impressing final part made me slightly melancholic and brought me back to the essence of the floating world. Something so deeply, so gracefully beautiful, yet ephemeral and, like everything else, destined to end.

One thought on “Geishas and cherry blossoms: floating world for a dreamy spring at Palazzo Albergati”