The young woman, she doesn’t look any older than 28, is standing on the stool, “the guy” has just wrapped an Italian flag around her neck and this smooth present gently brushes against her hijab. Standing still on her skinny jeans on skinny legs, she is telling a boy about half her age that, whether he likes it or not, she’s Italian.

«I didn’t want to leave Morocco you know, I was a happy kid playing with my and my animals in the country. If you have to blame someone, blame my dad for bringing me here. But I grew to love Italy, I studied and worked here most of my life,  this is my country and I love it. Yet I am glad that you are telling me what you think».

Even if he’s just said, basically, that «Everything’s because of the immigrants». Everything what? Just “everything”.

The kid is confused, he already wants to reply but the woman’s three minutes of speech aren’t over yet. «Some people move here to escape wars, or poverty. Others to study at University. Some come here for love» and here she points to her husband, also looking very young, who now goes up the stool.

It’s his turn to speak now. Just like her wife he oozes a down-to-earth, wise and acculturated vibe. He works for a cooperative promoting integration and is now trying to explain that, despite what some people are saying -both here in Piazza Maggiore and on social networks- the report that each migrant receives 35 euros per day to stay in Italy is utterly false. Plane fake news.

Then he offers a more accurate account of how the local government is dealing with the waves of migrations until his three minutes are over and it’s the turn of a middle-aged pale man with glasses and leather bag. He begins by enumerating the many countries he lived in and just when you’re expecting a speech about universal culture and freedom of living everywhere, he embarks into some delirium about Kalergi plan and other conspiracy theories.

This is just a very small piece of the live performance that goes on every thursday afternoon in Piazza Maggiore. It’s called “Lo Sgabellino” (the little stool) and has three simple rules:

1) You can only speak if you’re on the stool

2) You have 3 minutes to say whatever you want

3) No matter how false, delirious or against your values are the ideas expressed by the person in the stool, you cannot interrupt. All you can do is raise your hand and reserve a spot on the stool for you too.

It always begins quite slowly, with someone starting the conversation, usually the guy running this very local* open-air public speaking rite, and then it all goes with the flow, from current affairs to the price of milk. It can be a huge or a little circle of persons, people may pass by (remember that we’re on Piazza Maggiore in the late afternoon), stop, suddenly get all heated up and decide to walk up the stall, or just watch like the majority of people.

I know, it does seem simple and even ordinary, doesn’t it? But really, how many times do you actually see total strangers confronting current issues on a public square with the mandate of listening any single opinion in real life?

Do you want to hear the man from the street? Here you can find him in his purest form. Of any age and from any background. And you can see, happening and unravelling in front of your eyes, the most surreal streams of conversations as well as the most surprising. And surprised I am indeed every time I happen to walk by Piazza Maggiore, see a little animated crowd and internally go «Oh right! It’s thursday afternoon in Bologna: closed shops and Lo sgabellino!» 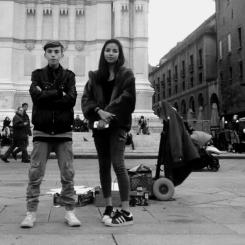 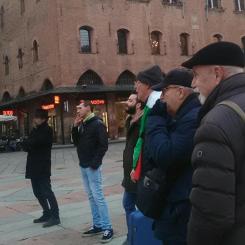 *It also goes on in Padua once a week, and sometimes in Ravenna. The Facebook page won’t be of great help in giving you the exact timing since it was last updated some years ago. Definitely better asking around.

One thought on “Move away Speaker’s Corner: Bologna has “Lo Sgabellino””