All of a sudden Bologna became popular. Vogue wrote about it. The New York Times wrote about it. So did The Guardian and the BBC. Ryanair added some flights to and from most European capitals and there you go: now everyone likes to post about their last weekend in the Red, the Fat and the Learned. Most locals are still bewildered or, at least, a little bit suspicious, but I think it’s great. Here’s why.

Yey! Finally my legs aren’t the whitest in town. Dozens of females in shorts are finally parading some milky-white legs without relatives and friends going all «Haven’t been on holiday yet, have you?». All colors and shades allowed, don’t feel alone anymore. 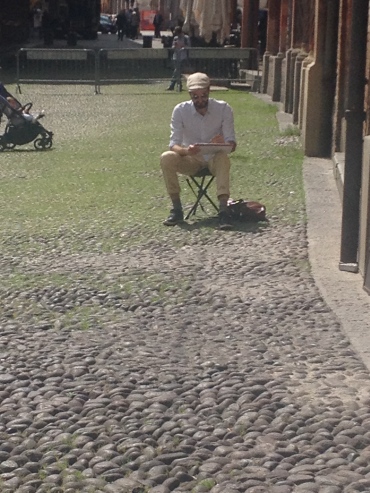 I love seeing Bologna through the eyes of tourists, or at least imagining what they are feeling while sitting outside a bar in a piazza, Panama hat and glass of wine de rigueur, savoring beauty and stillness. I’m a big fan of their smiles.

SUNDAYS ARE FUN AND ARTSY

Because it’s not just either shop or shop anymore. It is a fact that street artists have grown in number exponentially, and not just because now the air isn’t completely filled by the music of Beppe Maniglia (go check if you’re one of the few that missed him). Decent singers, inspired painters and hip hop dancers enrich the street life in a nice, unpretentious way.  Yes, I know, we also have the annoying pink guy pretending to be a child. That’s progress baby, I guess.

Italians in general tend to take their beauty a little bit for granted, and the people from Bologna are no exception. So it’s nice to follow the direction where a tourist’s nose is pointing towards and go «Oh, yeah, a medieval tower!» and «Look at that, one more low relief!». No, artworks don’t grow on trees, we’re just been very, very fortunate and blessed with centuries of artists and artisans. Let’s not forget it.

I’ve seen them. I’ve seen them and I felt blessed. First it was that elderly shy couple from Korea. And again the Chinese group, more than one sporting the “umbrella” finally used for its true purpose: protecting from the sun. As a Mediterranean vampire (a rare species, but we exist), when forced to go out in the daylight I usually walk very close to walls and buildings, hoping for some compassionate shadow, wishing I was born in an other era or another country. But now that I actually saw real people crossing Piazza Maggiore with a parasol, protecting them from the sun, I internally scream “Evolution! Relief! Yey! Culture is coming!”