So I’ll be busy all week end with an intensive yoga Teacher Training. But you, you really cannot miss Bilbolbul, this festival of comics books and graphic novels that takes Bologna by storm, and dive deep into this happy ocean of drawings, colors and parties.

Just forget the old idea of comics as the main icon of slightly offensive nerds&geeks stereotypes. Bologna has a strong tradition of comics art, small independent publishing houses and graphic novels. Plus, it’s a city where people like, actually love, to hang out and party. So this festival is one more excuse to fly from one opening to the other while enjoying some very cool pop art along the way. I’ve had a little taste this evening – original plan was vegan supper around 7, herbal tea and then bed and lights off by 11 PM. Didn’t quite work out – and it was pretty great. First a fast swim (two circles around the gallery, body temperature around 40 degrees, humidity 90%, human density unbearable) to the amazing Chris Ware‘s exhibition Il palazzo della memoria. This extremely talented author and New Yorker illustrator showcased a massive amount of his works, particularly from Building Stories and Jimmy Corrigan, the Smartest Kid on Earth. Like I said, the venue was packed (everyone was there darling! Like, everybody) and I plan to go again to savor the many works. But I’m glad I had a first taste (it’s free and on until Junuary 7th), and I also met Ware himself. Sweet. 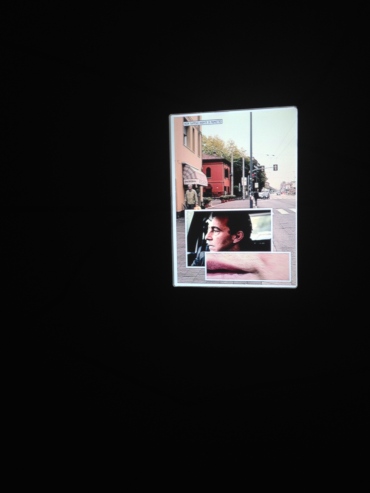 Then it was time for Spazio Labò were another exhibition of the official selection, Le città hanno gli occhi by Lele Marcojanni, was taking place. I was hungry and only crisps, wine and taralli were on offer (madness!) for us urban trekkers in the name of comics, but the exhibition was really, really cool. A sort of meta-comics about the different stories of comics authors from and in Bologna, told in a  comics style. Sounds tricky? Imagine it narrated with real life photographs and cartoon bubbles. Not sure I explained myself clearly, but it was really nice and, again, promised myself to go again in a quieter moment  (open ’till December 16th).

Super hungry, I decided  with a couple of friends to call it the night and go eat something, but other friends were visiting yet another opening along the way home, so it sort of felt necessary to also go and see Gabriel Delma’s Xuvvuu at Spazio &. The author’s intense and vivid images, between horror, dreamlike and tribal, made for a nice contrast with this sleek and stylish studio of graphic design. I was almost tempted to buy this large, colorful book by the author but it was 50 euros. No sir.

So finally it was time for pappa (detail you’re yet to know  about me: when hungry, and not provided with food in a reasonable time, I can touch peaks of true, sheer desperation) and we headed to Zoo. Halas, there wasn’t the food my friends and I wanted (cheeseburger for Julieta, veggie for me. Yes: ridiculously starving and picky) so we postponed the oh-lovely-moment-of-dinner and made a little tour in the venue, where of course one more exhibition was opening. It was Audrey Spiry’s In silenzio and man, it was good. Also, I caught her “signing” books in a table, which means creating instant art with some basic tools (a couple of crayons and a brush can do miracles in the right hands). So of course I had to get a copy for myself and also get my unique work of art.

The battle FOOD VS ART began. A queue of 6 people including me meant about 45 minutes that seemed eternity. On a hand, I was witnessing forms, dreams and colors taking place literally from nothing, becoming reality on paper and at the same time taking off from the page to always live in the eternal realm of fantasy and imagination. This for poetry. On the other hand, while Spiry’s magical fingers created a blue, orange, grey and white bird for Carlo, an ocean deep with magical soft waves for Lucia, a charming post-teen age girl face for Mario, a cake-craving dog (oh how I understand you dog!) for Luca and some nice ephemeral thing for whatever-her-name-was, I was reminding myself that I could still survive despite the low blood sugar levels and the impetuous desire to eat the person ahead of me (two birds with one stone actually). 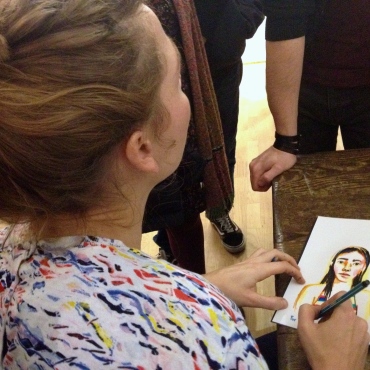 Eventually I had my marvelous sea snake and headed home. Where I am. With a full belly (thanks to my lovely lovely Syrian food providers Sham). And am writing this instead of having herbal tea and reading an Iyengar textbook to prepare for tomorrow’s yoga. And I’m here writing this first because I promised Chris Ware, and second because I want you all to go and enjoy this super cool festival. What I’ve seen was just a little tiny part of the massive amount of openings all at walking distance one from the other. All for free, all in lovely venues, most in historical buildings and definitely worth seeing. And if you want to skip the buzz of this week end check in the Festival’s website the dates for every single exhibition. Bologna takes comics art quite seriously. And you should too.