I’m rather lucky, as I happen to live near a street that is the best in town when it comes to vintage shopping. And this provoked quite a revolution in my shopping pattern, since I changed from skeptic to enthusiast in a handful of seasons and a few very happy sessions.

So, if you are looking for a vintage item of clothing, be it a super stylish late fifties gown or a cheap second-hand skirt, Via San Vitale is the place to be, with four of Bologna’s landmarks in a relatively small place.

Let’s begin from the bottom, near Porta San Vitale, and move toward the Two Towers. First shop you meet is La leonarda, technically in the tiny lateral street Via San Leonardo (ten steps on your right). Its owner is always wearing outfits that are so carefully assembled and echoing of a late ‘noon in East London that you wouldn’t expect such a convenient place. Stuff at La Leonarda is really cheap. Yes, the place is quite rusty and items often need serious ironing, but on the other hand if you want a skirt for 3 euros and a raincoat at 7, this is the place to be. And if you’re not a fussy picker, it’s actually fun to rummage through the mess, with new stuff coming in almost every day. Also, there’s always some lovely selection of music. Oh, and it was featured in that  New York Time’s piece everyone in Bologna was so smug about last year (where this photo also is taken from: NYT guys, if I wasn’t allowed to use it despite the logo please let me know and accept my apologies).

There used to be another thrift shop, Zenobialand, just in front of La Leonarda. It gloriously contributed to turning the area into “vintage district” but it was sadly shut down by the end of last summer.

Let’s continue with our walk through Via San Vitale, in the direction of the city center, stopping shortly before Piazza Aldrovandi at that cute shop on your left: stylish ladies, this is the place for you. Lovely Friperie is a regular at Senigallia’s Summer Jamboree festival and a milestone in Bologna’s vintage chic all year round. When it comes to lovely skirts and silky shirts from the Fifties and Sixties, or adorable coats from the Seventies and Eighties, this is the place for you. Rather pricey, probably the most expensive in this list, it offers in turn a very polished look, clothes that have all allegedly cleaned and disinfected, and a very feminine, stylish selection ordered by color. Lovely tiny fitting room in a former elevator. Check their Facebook page to be notified when they have their “Sbarazzo della domenica”, which is a Sunday’s special opening with extra sales.

And then there are my beloved Fratelli Broche, Stefano and Samuel, who I often turn to when feeling blue… Or just stop but their shop on my way to somewhere, regularly ending up not doing whatever I was supposed to be doing and spending an hour having a fitting&chatting session instead. Their selection is pretty amazing, and their taste impeccable: miniskirts from the Sixties, a great line of soft, coloured wool sweaters from the Eighties, elegant coats and gowns, plus an impressive collection of sunglasses and bright plastic jewelry that seem to be taken from a Bewitched episode. They clearly have all the right connections to access old shops’ warehouses and stocks (and shouldn’t you like secondhand, ask and they’ll provide you with some never-weared items that still have the tag on, milady) plus a sincere passion for vintage, that is also reinforced by their parallel activity as performing artists. Also, I never had a boring conversation with them. And this is even rarer than an A-line skirt that I don’t like. 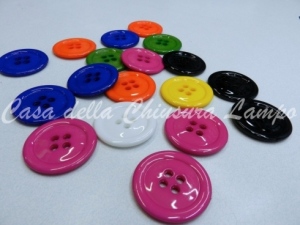 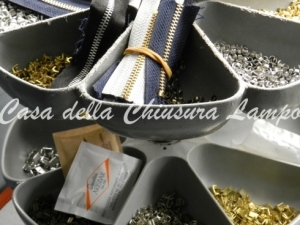 Just as you reach the top of Via San Vitale, with the Two Towers on your left, look right and enter the small Galleria Due Torri. If you want the raw, ultimate vintage experience, there you’ll find La casa della chiusura lampo (literally, “house of the zipper”). Mind you: it doesn’t sell vintage clothing but can actually fix a malfunction or two on your newly bought vintage coat. And it is a rétro universe in itself: working since 1938 (yep, you read that right), it is one of the few surviving “haberdasher’s shops” and will amaze you with its selection of buttons, zippers, fabric patches, tulle, ribbons and some other items you could only vaguely remember seeing in your grandma’s room. Micro manual work is taken seriously here and they will speak with you in the secret language of patching and sewing and repairing, which is a vintage art in itself.